We are Layman Fabrication, Inc.

“Top quality products and open communications with our clients are our top values  here at Layman Fabrication, Inc.”

How it all started

Layman Fabrication, Inc. is a family owned, family operated business located in Southern Indiana. Established in 2003, in an old barn in the family’s backyard going by the title Layman Fabrication.

Doug decided, to go out on his own, to open his own shop in 2003. Starting in his old barn, he has worked hard to establish a trustworthy, dependable, and successful business. This took a ton of hard work and dedication throughout the years.

Layman Fabrication was a one man operation for years. Until Doug’s son Kyle decided to join in on the family business.

Kyle also has the same dedication and is building towards the same experience level as Doug.

These guys both strive to go above and beyond their clients expectations. Always guaranteeing top quality jobs and a quick turn around.

In 2011, they were growing enough to build a new barn. While they couldn’t just stop production to build, they decided to build a new pole barn over their current building.

Little did they know only a few years later they would need to expand again!

Recently they have expanded their business to the North Vernon Industrial Park. The new building is 8400 sq. ft. and the area will allow for even more expansion when needed. This new area allows them to take on much larger projects, be more efficient, have room for new equipment and also have the capacity to bring in more experienced fabricators. 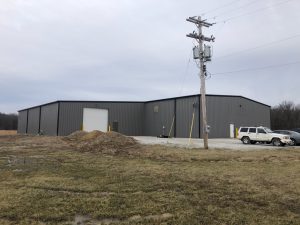 a total of 12,400 square feet of manufacturing space. This has helped with efficiency and allowed Layman Fabrication, Inc. to take on larger and more projects.

The Next Step
In 2o2o Layman Fabrication, Inc. took the big step into our newest facility at a total new location. This newest move is into a 25,000 square foot building, doubling our production space. 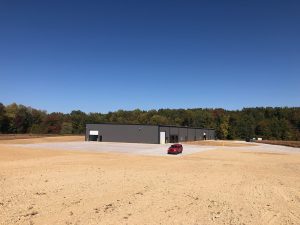